Posted on October 2, 2012 by Scoutmaster

WE DID IT!!  Something my boys and I have been working on for five years, we finally finished the Hiking Merit Badge.  It started in 2008 when they were 11 with our first 10-miler to Dog Lake from Butler Fork.  I watched their strength and stamina increase every year as we’d complete a few more hikes toward this goal.  By June of 2010, we had signed off on requirement 5. 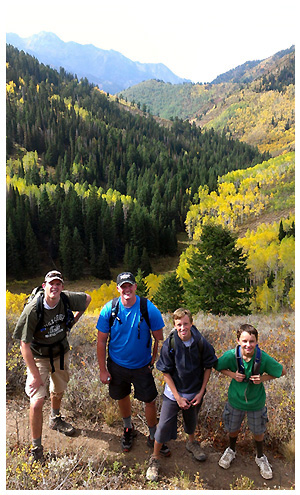 There was talk about completing requirement 6 that Fall (while they were 13), but I suggested they hold off one more year.  Unfortunately, the summer of 2011 was shortened by deep snow well into July and other things tugging at their time including Scout Camp, Youth Conference and Varsity On Belay.  2012 proved to be another busy summer but things lined up this past weekend to finally git ‘er done… 20+ miles of an awesome experience on the Desolation Trail!

Of course, a hike report like this would be difficult to follow without some sort of visual reference. Sooooo, how about a Google Earth map! The route description below matches this KML file with waypoints and available turnouts included.

If you choose this trail to complete requirement 6 for your Hiking Merit Badge, I don’t think you’ll be disappointed.

Our first five or so miles were technically on the Great Western Trail.  We started at Guardsman Pass just above Brighton at 7:45 on Saturday morning.  The highlight along this stretch is Scott Hill, also known as “Puke Hill” by the local mountain bikers.  It’s a good steady grade that gets your heart pumping right off the bat.  After traveling along the Wasatch Crest that divides Park City from Salt Lake City, we reached Desolation Lake at 10:15.

This is mostly downhill until the Desolation Trail meets up with the Mill D North Fork trail.  This is your first turnout if you need to bail for any reason.  From that point on the trail to Dog Lake is .6 miles at another steady climb.  By 11:30, we took our first break at Dog Lake and ate half our lunch.  The Big Water/Little Water loop on the other side of Dog Lake is another way to exit if you had an incident or injury to deal with.

Dog Lake to Mill A Basin (5 miles)
At 11:45, we were back on the trail and headed toward Mill A Basin.  This stretch is mentally long since it traverses along the south slope of Gobblers Knob, in and out of every gulch along the way.  Not far after mile marker 11, we did stop to notice the cell towers on Scott Hill far across Big Cottonwood Canyon back where we started.  It was awesome to recognize that landmark and see how far we had come.  The fall colors on this section were also incredible as we made our way to Mill A Basin at the base of Mount Raymond.

This section also has two turnouts that both end up at the Butler Fork Trailhead in BCC.

By 2:10, we stopped in Mill A Basin to rest and eat the second half of our lunch.  There we noticed people waving and calling out from the top of Raymond.  We waved at the tiny specs of color and called back.  Fifteen minutes later, we snapped a few pics and continued the journey around Mount Raymond.  A fifth turnout is possible along this section, to the Mill B North Fork trail still on the BCC side.  It is not far after that point where you find the saddle that crosses the ridge over to Millcreek Canyon and the Porter Fork Trail (your last chance to turn out).  It was 3:30 when we passed this trail marker.

I’m sure it is this section of terrain that the Desolation Trail gets its name.  We didn’t see another hiker this whole way as we experienced numerous talus fields, gigantic boulders, 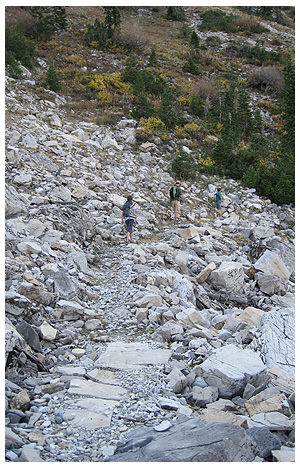 narly deadfalls, intense cliff walls and very steep switchbacks… talk about remote, rugged country!!  This description might sound sketchy, but it isn’t.  There is no exposure here since no scrambling is involved.  The trail, which was obvious to follow, just passes through these rough mountain characteristics without any serious danger to worry about.  It was just, well, desolate. We also found a bunch of sea shells along this part of the trail which I could only think is somehow related to the history of Lake Bonneville in this area.

Our last energy bars were taken at the top of the third and final place of elevation gain at 4:15.  Two hours later, we finally reached the Salt Lake Overlook at 6:15pm. That’s where we made the call for our ride to come get us.

The final section from the Overlook to the trailhead is popular and very well-traveled.  In the hour it took us to reach the end, we passed at least a dozen people going up.  By that time, we were tired, hungry and couldn’t wait to take those boots off!

…and so, WE DID IT!!  23 miles over 11.5 hours at an average moving speed of 2mph.  Here’s the link to the Google Earth file again if you didn’t download it previously.  Also shown below is the elevation profile from start to finish:

If you are looking for 10-milers along the Wasatch Front to accomplish requirement 5, here are the ones we did and when we hiked them:

If you have any questions, I’d be happy to help… either post a comment or drop me a line.