Words of Wisdom from a Wise Old Scoutmaster, Bill Burch

Posted on October 8, 2012 by Scoutmaster

I never meet Bill Burch personally, but wish I had after watching a few video clips of him recently posted online. He’s the kind of Scoutmaster I hope to become someday. Take some time to hear these words of wisdom about changing the lives of boys for the better.

After watching this and several other clips of Bill, it’s obvious to see just how much he loved serving the youth.  How sad is was to learn about the loss of such a great scouter as news traveled across the airwaves last week about the passing of this wise old Scoutmaster. 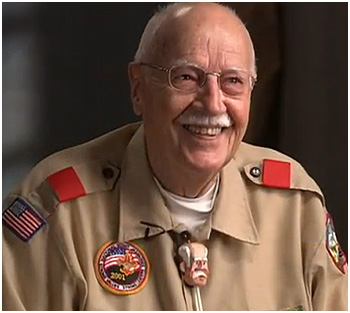 Everything I’ve read about Brother Burch talks about how he touched the lives of so many scouts from all over the world. With a hand-carved bolo tie as a gift, he challenged and encouraged thousands upon thousands of boys to live a life that aligns with the Scout Oath and Law.  We can only hope to have that kind of impact.

As he puts it in this video, “We have a duty to reach that boy, to get an arm around him, and help him find his way through those challenging years – when his character is being formed – when his attitudes are being shaped – when his commitment is being determined.  If we serve as an example, and as a tutor and a mentor for that boy, we can be instrumental in bringing out his full character – putting him on the right road as he grows and matures.  That is one of the great obligations of a leader in a scout troop.”

One Response to Words of Wisdom from a Wise Old Scoutmaster, Bill Burch