We chose the Wasatch Crest Trail as our second 10-miler.  Since moving to Utah, I’ve always wanted to see this section of the Great Western Trail and the crest between Salt Lake and Park City.  I also heard many people talk about how awesome this trail is.  So… 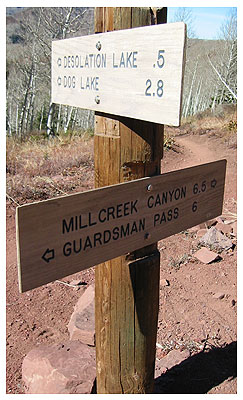 Our hike began at the gated logging road, just below Guardsman Pass, at the top of Big Cottonwood Canyon near Brighton Ski Resort.  The route is pretty well traveled and would probably be best done on an odd-numbered calendar day when bikes are not allowed on the trail.  I make this suggestion to avoid the potential collision as they bomb down at speeds much faster than you are able to jump out of the way.

The first two miles of the WCT are the only uphill part as you climb towards Scott Hill, also known as “Puke Hill” by the mountain bikers.  After that, it’s 10 or so miles of very little elevation change until the noticeable downhill decent starting at the 6th mile.  There are also several peaks slightly over 10,000 feet along this ridgeline that also crosses right above The Canyons Ski Resort.

Yes, this one is longer than 10 miles!  It’s more like 11.something according to my less-than-accurate GPS tracks, 12.5 according to the trail signs and 13+ if you detour for lunch at Desolation Lake.  However you want to look at it, prepare for 10+ miles.  There is a section of trail on the map that looked like a shortcut to the end in Millcreek Canyon (shown in the Google Earth file linked below).  Unfortunately, as we approached that location on the trail, there were branches across the way that appeared to direct people away from taking this path.  Not sure why it was blocked, but that would have shaved off the extra 2 miles we did not expect…cutting it back closer to a 10-miler according to my favorite topo software.  Oh well, it was a great hike either way!

Here’s a Google Earth file of this route with waypoints to help you navigate the Wasatch Crest Trail from Guardsman Pass to the Big Water trailhead at the end of Millcreek Canyon.