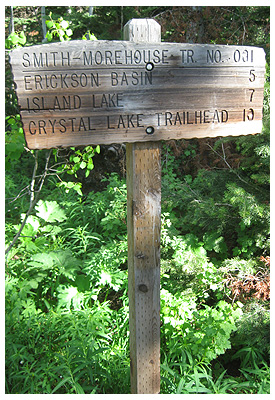 The Smith and Morehouse Trail made it to our list of scout 10-milers for a couple of reasons:

For starters, we camped at one end of it for our very first camping trip after moving to Utah.  I remember seeing the trailhead sign at the back of the Ledgefork Campground and thinking, “I wonder where that goes”.  Sometime later, we had explored around Trial Lake and discovered this was the other end of the Smith-Morehouse Trail we saw from Ledgefork… cool!

Our trip began at the Crystal Lake trailhead near Trial Lake and Washington Lake, just off the Mirror Lake Highway above Kamas.  This is a relatively easy hike in the direction we chose.  There’s a slight elevation gain as you crest the saddle between Haystack Mountain and Mount Watson (just after mile 1) and another incline right before you reach Island Lake (after m3).  The second saddle between Cone Peak and Long Mountain (after m4) is the last little gain in elevation before it turns all downhill from there!  We had a bit of a challenge finding the trail in the rocky terrain up high but a GPS, a few cairns and a very steep and obvious drainage kept us headed in the general direction.  We did eventually locate the actual trail and found it to be one steady decline.  Honestly, considering this trail from the opposite direction would be a real challenge of strength and endurance for the shape I’m in right now.  Take a look at this elevation profile to see what I mean:

This route definitely called for two cars.  We parked one just beyond the Smith and Morehouse Reservoir at the entrance of the Ledgefork Campground.  The other was left at the Crystal Lake trailhead to be picked up later in the day.  Of course this added some extra drive time, but we were dead set on experiencing this trail from one end to the other.

The lesson from this trip: BE PREPARED!!  One of my brother-in-laws joined us on this trip and almost lost it due to extreme dehydration and heat exhaustion.  Later he told us he felt like passing out several times but didn’t say a word and just kept pushing on.  It taught me to pay more attention to the condition of others in the party and not assume all is A-ok.

Here’s a Google Earth file of the route with waypoints to help you navigate the Smith-Morehouse Trail from either direction.