Getting started on your Eagle Project

How to get a boy to Eagle has been on my mind a lot lately.  Perhaps because it’s the 100th anniversary of this award and I’ve been using that as a way to motivate scouts in my unit who are almost there.  More closer to home, the thought of getting boys to Eagle involves 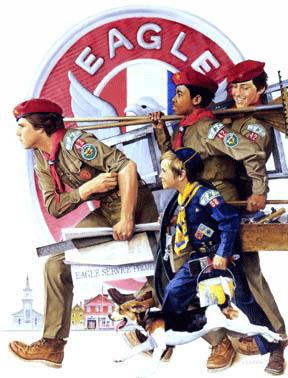 my own two sons.  Both just turned 15 and all they have left for their Eagle is to do this service project.  I try to keep them excited about scouting, but for some reason, it’s been difficult to get either one to spend any time on this.  I’m positive I’ll be able to get their attention when it comes time for them to drive!

Anyway, I was browsing the web the other night and found an article on ScoutmasterCG.com entitled Fledge Eagle Scout by Larry Geiger.  I agree with this author’s perspective about the Eagle project and am going to incorporate these points so my own troop can understand some common expectations early.  Here is that insightful list of things to consider as you think about getting started on your Eagle project:

1. The Eagle Scout should initiate his project.  Someone may suggest an available project to a Scout, but the Scout must pick his own project.  Eagle Scouts projects should not be assigned.

3. The Eagle Scout Candidate should write the Eagle Project Proposal document.  Parents, adult leaders or others may help him edit it, but he must write the original.

4. The Eagle Scout Candidate himself should contact his unit leader to gain approval of his proposal and get his proposal signed.  Scoutmasters should not be initiating this process – it’s up to the Scout.

5. The Eagle Scout Candidate himself should contact the district advancement person to schedule a meeting to gain approval and get his proposal signed.

6. The Eagle Scout Candidate should create his project plan after his proposal is approved and signed. He can work with his mentor on this phase of the project.

7. The Eagle Scout Candidate should schedule the actual work on the project in collaboration with the community organization’s schedule if required.  He creates a work schedule; informs the organization, Scout and adult volunteers, and any other person who has interest in the project.

8. The Eagle Scout Candidate should lead the actual project implementation. He should be the person that folks report to when they show up to help. He should assign tasks to workers, including adults. He should monitor work and suggest rest stops and supply water. He may delegate portions of the work to crews who are under the leadership of another Scout or adult. He should directly assign tasks and coordinate and delegate

work to Scouts who are volunteering.

There’s a lot more to an Eagle Project that just helping out a religious institution, a school or your community.  This is really an exercise in *demonstrating* leadership…actually DOING what the young man has been taught since joining the Boy Scouts.  Parents and adult leaders alike, steal the opportunity from a scout if they do anything other than encourage, make suggestions and point him in the right direction.

Speaking of pointing an Eagle Scout Candidate in the right direction… I just noticed the Eagle Scout Service Project Workbook changed from the last time I saw one.  It is now broken out into two key parts:

Here’s a link to the PDF version of this new workbook.  At first glance, it resembles how a real-life project would undergo the process…imagine that!  I’ll have to dig in to understand the details and start spreading the word about the new process.