Did you know 2012 is the centennial anniversary of the Eagle Scout Award?  Yep, it’s been 100 years since the first scout earned his Eagle back in 1912.  His name was Arthur Rose Eldred, a 17-year-old from Long Island, New York.  Since then, more than 2 million Scouts have earned the rank of Eagle.  In 1982, 13-year-old Alexander Holsinger of Normal, Illinois, was recognized as the one-millionth Eagle Scout. 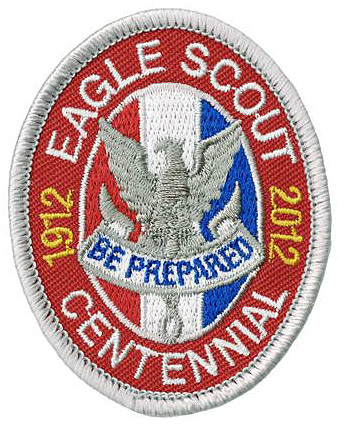 In 2009, Anthony Thomas of Lakeville, Minnesota was the two-millionth.

To commemorate this history, a special-edition patch (pictured right) is available for those who earn the Eagle Scout Award this year.  If you have any boys on the verge of accomplishing his Eagle, this could be a little more incentive to git ‘er done!  So don’t wait until the last minute.  Get those papers turned in early since the application process can take some time too!