I used to think our camping options were limited once winter came and our favorite hiking and backpacking trails got buried in snow… until I rented a pair of snowshoes!

It started with my daughters wanting to do something during Christmas break in 2014 and me casually saying: “let’s go rent some snowshoes”.  I had been wanting to try it for a few seasons by then and when neither balked at the idea, I ran with it.  As snowboarders, we already had the proper clothing and knew what to expect out in cold weather.  The cost to rent was a great bargain ($10/pair including poles) from Sports Authority in Murray (the Sportscastle, most known for SNIAGRAB), and I had already been thinking about where we could go to have a good first experience. We had so much fun that day!  Afterwards, I knew this was something I wanted to do with my scouts as a winter camp experience. 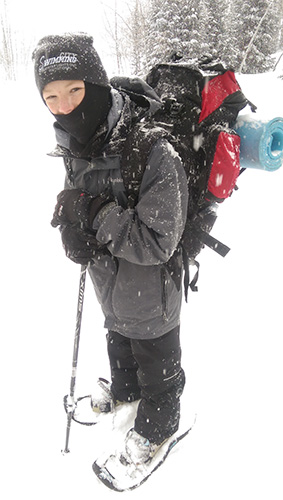 So for the past two January’s, we have done just that: rented a bunch of snowshoes, donned our backpacks, loaded a few extra things in an ice fishing sled and trudged through 8-10” of fresh powder a decent distance away from our cars.  It was awesome!
(We even had one of the dads hike in fresh donuts for us the next morning just for fun.)

My favorite experience this second time around was with the 2nd year scouts.  These were the boys who found themselves slightly unprepared last year; cold, hungry and wishing they were back in their warm beds.

Fortunately, we were able to talk them into coming again and use what they learned last year to be more prepared this year.  What a concept, eh?  These same boys were 1 year stronger, 12 months smarter and much more prepared than they were 371 days ago.  In fact, they raved about this camp so much that it gave us leaders an opportunity to teach a few powerful lessons.  What better way to learn than by going through the experience yourself, right?  As we talked about the “before and after” differences, I could tell they got a big boost in confidence as each individually compared their abilities between the two experiences.

That’s what scouting is all about in my opinion, for boys and men alike.  Expand the comfort zone.  Do hard things until those things don’t seem all that hard any more.  Then when you take a minute to look back at all the challenges you pushed your way through, you can see just how far you’ve grown.  I’ve seen it with me and with many of my boys.

Now I can hardly wait until next season… I have a nice new list of camp ideas and destinations to go winter backpacking on snowshoes!