My troop just spent the weekend camping at White Rocks near Dugway, for the second April in a row.  We like this destination in April for a few reasons. 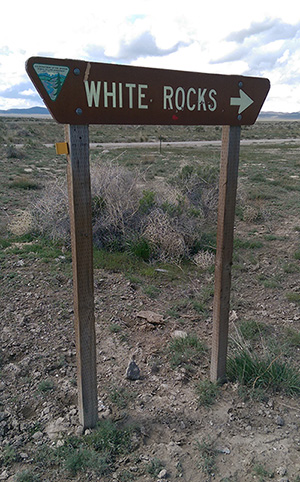 First, it’s generally warmer and drier out in Utah’s west desert as my scouts “transition” between winter camping and summer backpacking.  In other words, I have yet to influence my troop to do one last campout up somewhere in the snow once spring rolls in and everyone’s in t-shirts and shorts.  I love winter, snow and cold weather and can’t get enough.  So I’ve always thought it’d be fun to backpack up to someplace like Brighton Lakes on snowshoes in April – especially after the ski resort closes.  Unfortunately, I’ve been alone on that idea every April so far.

Second, White Rocks is a great spot for boys to climb and explore the unique landscape of these rock formations.  This mini mountain is very kid-friendly with easy angles to crawl up and cool coves that have been carved out by the wind.  The boys have talked about sleeping in one of the larger coves each time we’ve gone but there’s always a reason they choose otherwise, and I haven’t disagreed with them (and slept better as a result).  There’s also a spring that gurgles right up from the middle of the main rock, which fascinated everyone the first time we found it.

White Rocks is also very easy to get to if I were to highlight another reason to check out this spot.  Depending on where you’re coming from along the Wasatch Front, you could either go around the Oquirrah Range to the north via I-80 and Skull Valley Road or to the south down around Eagle Mountain through Cedar Fort, Fivemile Pass, Rush Valley and Terra.

Both times we’ve gone, we took the north route to get there and the south route home.  There’s not a huge difference for us coming from south Salt Lake Valley (Riverton/Herriman/Bluffdale area).  If you’re not in a big hurry to get home, the south route is definitely more scenic as the road winds up and over Johnson Pass in the Onaqui Mountains between Terra and Rush Valley.

We have also made it a tradition to stop in for lunch at Wendy’s in Saratoga Springs on Redwood Road (at 4 Corners) before making the final stretch home.

White Rocks has been a winner for us each trip!  In fact, we were the only Boy Scout troop there this last time only to be accompanied by a Young Women’s group who was out getting some camping experience as well.  I thought that was awesome as those girls climbed all over those rocks just as much as the boys did… and fortunately for me, my boys were too young to be interested.  So all was well that ended well and everyone had a great time.