My troop has gone to Goblin Valley every year for the past 6 years, making this a tradition since 2009.  We typically go in October when the desert temperatures are pleasant and the amount of people is scarce.  We will leave on a Friday at 4, stop in Price for dinner around 6, find a spot along the Wild Horse Road before 9 and set up camp in the dark.  Everyone is always excited about getting there while finding the late arrival somewhat adventurous. 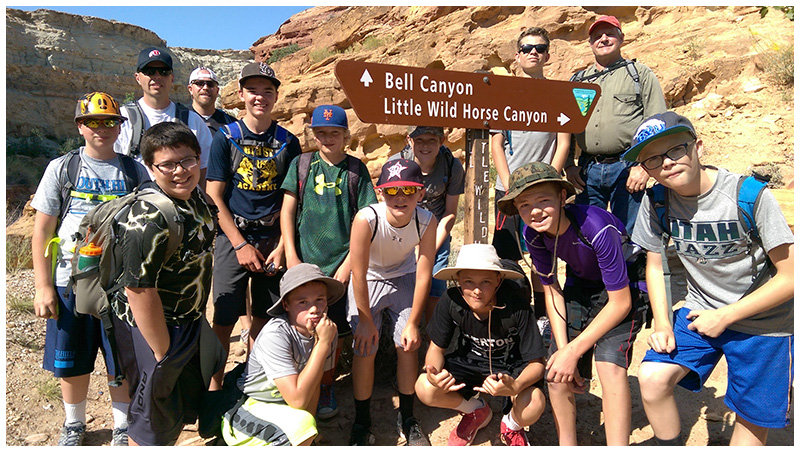 The only issue we’ve ever had with this annual trip is that Saturday feels like such a GO GO GO day… we’re eating a cooked breakfast by 8, on the trail by 9, back to camp around 1, making deli sandwiches for lunch and breaking down camp by 2, then some hoodoo exploration in the State Park until it’s time to jump back in the car for the return drive home.  Does that sound rushed?  We’ve tried a few variations over the years, but it’s still a lot to do in a day assuming no complications or issues that have to be worked through.

So this year, we decided to try something different.  We added a second night, moved it to June right after school let out (which also helped avoid the schedule conflicts we faced in October with football) and invited our Varsity and Venture scouts to join us.  The adjusted plan was to leave on Thursday at 4 in order to have all day Friday to explore the canyons.  The younger group would do LWH and Bell while the older group did Ding and Dang.  We would then decide when to explore the hoodoos in the State Park based on how Friday went or even before we left on Saturday (we ended up going Friday after dinner).

Having a full day definitely relaxed the schedule and allowed us to slow the pace down quite a bit.  However, this experience was hot, real HOT!  … not so much in the canyons, but definitely when we got back to camp.  I didn’t remember it being that hot when I did a similar trip with my Venturing Crew back in 2011.  Maybe it was a cooler June then.  I dunno, but this we all wished there was a lake or river nearby to clean up, cool off and enjoy the rest of that afternoon heat.  Too bad no one was aware of such a watering hole.

So a unanimous vote had us loaded up and headed to Hanksville for some shade and shakes at Stan’s Burger Shak.  The boys felt like they hit the jackpot when they learned that a YW’s group had stopped here on their way home from a youth conference or something.  I don’t know if any phone numbers were exchanged, but we saw an awful lot of flirting going on back and forth.

While this was a great memory and all, I’m not sure what we’re going to do next year.  We might just move it back to a rushed 1-nighter in October.