An honest perspective about becoming an Eagle Scout 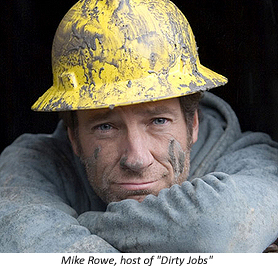 In a few weeks, my two boys will be having their Eagle Court of Honor. As I’ve been scanning the web looking through lots of ideas for how to run one, I came across this letter from Mike Rowe that I read for the first time.

It kinda surprised me that I hadn’t heard about this letter until now.  Maybe that’s because it was written in 2008, a bit before I became a Scoutmaster. Either way, it’s a great message and one that still rings true today!

Have a look in case you’re new or haven’t seen it yet either. I wonder if reading it as a Scoutmaster’s Minute sometime might not be a bad idea… what do you think?

Mike,
I’m not sure where I heard that you are an Eagle Scout, which brings me to my question. Could you PLEASE take a moment & post to my 13 year old son Kelby & encourage him to finish scouting (& anything else that will help with this?) Reason I’m asking is that he only lacks 1 1/2 – 2 years in reaching Eagle, but some of his buddies have got him to thinking scouting isn’t cool at his age.
Thanks much, Gary

Kelby,
Your Dad asked me to drop you a line and say something inspirational that might persuade you to dig down deep and find the determination to make the rank of Eagle Scout. It’s a reasonable request, from a father who obviously wants to see his son succeed. But here’s the thing – The Eagle Award is not really meant for people who need to be dragged across the finish line. It’s meant for a select few, and I have no idea if you have the guts to see it through.

Statistically, I suspect you do not. Only one out of a hundred Scouts make Eagle, so if you fail, there will be lots of other people with whom you can share excuses. Quitting now might disappoint your Dad, but I doubt that he or anyone else will be overly surprised. Anytime 99 out of 100 people do the same thing, it’s not exactly a shock.

I’m not trying to be cute with a bunch of reverse psychology. When I was 15, there was nothing that anyone could have said to me that would have inspired me to do something I didn’t want to do, especially a stranger with a TV show. So I’m not going to assume you’re any different, or pretend that I have some influence or insight that you haven’t already heard from a dozen other people who actually know and care about you. I’ll just tell you straight up, that doing something extraordinary can be very lonely, and most people simply aren’t cut out for it. Being an Eagle Scout requires you to be different than most everyone around you, and being different is really, really hard. That’s why the award is called “an accomplishment.”

Personally, and for whatever it’s worth, the best decisions I’ve made in my own life, are those decisions that put me on the outside of being cool. Singing in the Opera, working in home shopping, starring in the school play when the entire football team laughed at me, and especially earning my Eagle, were all choices that required sacrifice, hard work, and delayed gratification. I have no idea if you possess those qualities, or even envy them.  But I can tell you for certain, that NOT getting your Eagle, will be one of the easiest things you’ve ever done.

Whatever you decide to do Kelby, it’s important to remember that the decision is yours. Not your Dad’s, not your friend’s, and not your Scoutmaster’s. And you’ll own that decision for the rest of your life.

Sometimes, the truth hurts…and this perspective could hit home with many young men out there who aren’t used to working hard, earning their own way and typically have others swoop in and take care of things when the going gets tough. I hope that’s not you.

One Response to An honest perspective about becoming an Eagle Scout