Scout Night with the Utah Grizzlies

Growing up in Chicago and being a hockey player myself, I love watching the Blackhawks and have lots of memories going to games in the old Chicago Stadium. Now that I live in Utah, the closest professional hockey I can get (without traveling to Denver, Phoenix, LA or even back home) is with the Utah Grizzlies, an affiliate of the Anaheim Ducks. 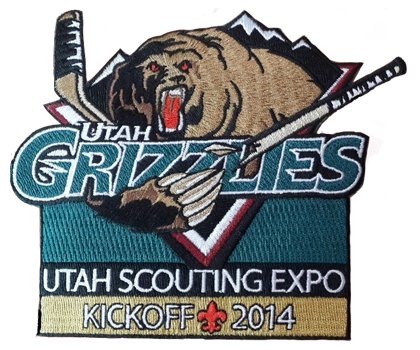 What does this have to do with Scouting?

Once a year, the Grizzlies franchise offers a night for Boy Scouts to share the action and excitement of the greatest sport on ice.  Scouts of all ages can come for just the game take part in an overnight experience that involves a Broom Ball game on the ice, a late night movie on the big screen and a catered breakfast the next morning!

This is also the first year the Grizzlies are opening this up to all three councils in Utah as a way to kick off our Scouting Expo.  So come join the fun, support your scouts and LET’S SEE SOME GRIZZLIES HOCKEY!!

The scouts and leaders will sleep on the 4th floor concourse.  Popcorn will be served during the post-game movie but be advised, NO MEALS will be provided during the game.  All participants are welcome to purchase food at concession stands during the game, or eat before attending.

The movie on the big screen this time will be “Wreck It Ralph”, a Disney film.

When the Grizzlies hosted this sleep-over last December, they had nearly 450 scouters attend.  340 of them spent the night and had an awesome time!