Baylor finds “Merit Beyond the Badge” in Eagle Scouts 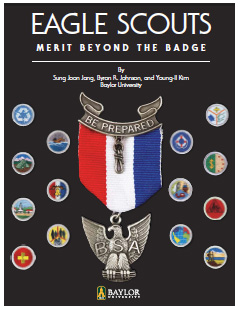 I just read Brad’s Blog about the study Baylor recently conducted to further illustrate the value of Scouting and its impact on society.  Similar to the “Values of Americans” survey that shows a direct connection between a Boy Scout and his personal values over a lifetime; this scientific study focuses more specifically on the additional benefits a young man can obtain by earning the rank of Eagle.

Those of us who believe in the program know how much Scouting “strengthens young people’s attitudes and actions toward God, family, country, and community”.  What Brad doesn’t mention in his post is that there are a lot of things different about an Eagle Scout.  More specifically, when compared to other Scouts and men who were never Scouts, this scientific research found that:

“We found that the effort and commitment required to earn this rank produces positive attributes that benefit not only these men in their personal and professional lives, but also benefits their communities and the country through the service and leadership they provide,” said Dr. Byron Johnson, lead researcher, Baylor University.

Bob Mazzuca, Chief Scout Executive of the Boy Scouts of America had this to say: “This research validates for the world something we’ve known about Eagle Scouts for years. They lead. They vote. They donate. They volunteer. They work hard and achieve their goals.  In short, Eagle Scouts are exceptional men.”

So once again, does living by Scout principles and working to earn BSA’s highest rank really make a difference?  My response should be no surprise… YOU BET IT DOES!!

Full details of this study can be found in the attached printer-friendly PDF file.

2012 marks the 100th Anniversary of the Eagle Scout award.