A Gold Fringe Infringement on the American Flag?!

During our District Roundtable last month, one of the Staff members shared his perspective about gold fringe on the flag of the United States with a term I had never heard before: “Admiralty Law”.  He gave very stern instructions to remove any American flag from our units with this gold fringe, because of what he said it stands for (no nation, no constitution).

Huh?? …our Troop uses a flag like this!!  It was purchased long before I was ever asked to be the Scoutmaster.  The first time I saw it, I remember thinking how beautifully decorated this flag was – a fancy embellishment for special occasions, like a Pack Meeting or Court of Honor.  That gold fringe never once crossed my mind as being any kind of violation of this great country, our Constitution or any United States Code.  So this information came as a surprise to me and caused some confusion and concern.

I immediately started looking into our alleged “infringement”.  WOW!!  Are there ever a lot of differing opinions, false quotes and misguided interpretations about the meaning of gold fringe on an American flag!  As my research continued, I found nothing specifically declared about fringe of any color in the U.S. Code yet I really wanted an authoritative source to give a definitive statement about this issue.

My efforts did find several web pages that referenced the U.S. Army’s Institute of Heraldry as the official custodian of our Flag’s design.  While the answer to this falsehood is not found on TIOH’s Frequently Asked Questions, their reply to an email I sent stated:

Gold fringe is used on the National flag as an honorable enrichment only.  It is not regarded as an integral part of the flag and its use does not constitute an unauthorized addition to the design prescribed by statutes.

Records of the Department of the Army indicate that fringe was used on the National flag as early as 1835 and its official use by the Army dates from 1895.  There is no record of an Act of Congress or Executive Order which either prescribes or prohibits the addition of fringe, nor is there any indication that any symbolism was ever associated with it.  The use of fringe is optional with the person or organization displaying the flag.

The fringe does not appear to be regarded as an integral part of the Flag, and its presence cannot be said to constitute an unauthorized addition to the design prescribed by statute. An external fringe is to be distinguished from letters, words, or emblematic designs printed or superimposed upon the body of the flag itself.  Under law, such additions might be open to objection as unauthorized; but the same is not necessarily true of the fringe.

The US Army Institute of Heraldry added in their email response:

It is customary to place gold fringe on silken (rayon-silk-nylon) National flags that are carried in parades, used in official ceremonies, and displayed in offices, merely to enhance the beauty of the flag.  The use of fringe is not restricted to the Federal Government.  Such flags are used and displayed by our Armed Forces, veterans, civic and civilian organizations and private individuals.  However, it is the custom not to use fringe on flags displayed from stationary flagpoles and, traditionally, fringe has not been used on internment flags.

Honestly, I would like TIOH’s FAQ to clearly affirm that fringe is considered completely within the guidelines of proper flag etiquette.  Wouldn’t that put to rest all of this debate?  Unfortunately, the email I received from a Program Analyst at TIOH informed me that:

We do not include this information on our website because we no longer answer questions on the US Flag for civilians – only the official use by the Army which is covered in our regulations. 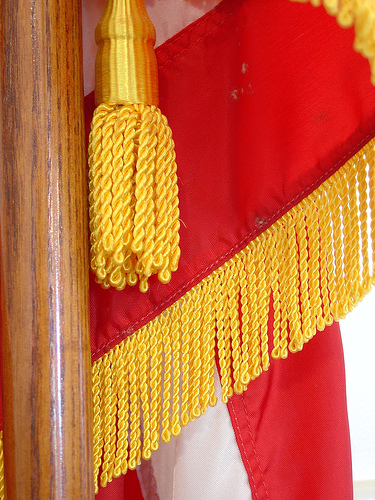 Not sure why this regulation was made.  Without a formal AND public statement from the official office responsible for the design of this National symbol, it kinda makes this dispute tough to argue…doesn’t it?

In any case, here are numerous court decisions that also reject this idea of a gold fringe infringement.  I’m sure there will remain naysayers even after all this proof.  For me, I’ve spent enough time digging into the subject and got what I needed to support my original belief: there is no symbolic meaning here at all.  So with that, we are keeping our gold-fringed flag and will so proudly hail it, one nation under God, indivisible, with libert and justice for all!

NOTE: There are several websites out there referencing a book that supposedly debunks the myth of gold fringe.  It’s called So Proudly We Hail, The History of the United States Flag by Rear Admiral William Furlong and Commodore Byron McCandless, published by the Smithsonian Institute Press in 1981.  Unfortunately, I have combed through those pages FOUR times and can NOT find anything that makes any mention of gold fringe.  That’s too bad too since the cover flap of this book reads:

“A richly illustrated history of the American flag, So Proudly We Hail weaves the facinating and definitive story of the country’s central symbol from colonization to the present.

Written by Rear Admiral William Rea Furlong, designer of the new star arrangement when the 49th and 50th stars were added to the flag and, Commodore McCandless, a consultant to three presidents on flag protocol, this book is eminenty readable as well as authoritative.

So Proudly We Hail is the first broadly researched history of the United States flag that includes both historical and technological information, and becomes the most up-to-date account of the history of our nation’s flag.  It will stand as the definitive reference book on this subject for many years to come.”

31 Responses to A Gold Fringe Infringement on the American Flag?!