Check it out! When we did our Messengers of Peace day of service as part of the Jambo experience, a local reported was covering this story about out troop… 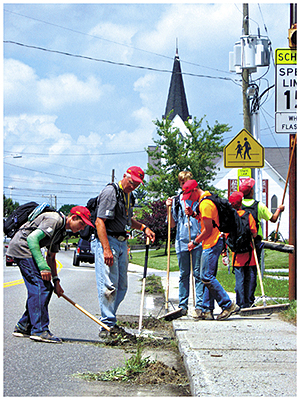 ATHENS — Block after block, 36 Boy Scouts from Utah scraped weeds from the roadside in downtown Athens on Tuesday afternoon.

Their day of service, part of the 2013 Boy Scouts of America National Jamboree, had positive effects, according to local organizers of the effort.

“I’m really pleased with the efforts the Scouts gave us today,” said Noel Alexander of Athens, the project leader. “I’m really happy and proud with what they got accomplished.”

William Hoyle, 16, of West Jordan, Utah, said, “I think I learned that when you work together, you can get a lot more done than you can by yourself; that doing something that seems simple may have a bigger impact.”

“They did an excellent job,” said Roger Lokay, a member of Athens town council and the assistant leader of Tuesday’s project. “You can see their hard work all over town.”

The work was shared by the Scouts, four adult counselors who traveled with them from their brand-new reserve in Fayette County, and about a dozen adult volunteers from Athens. 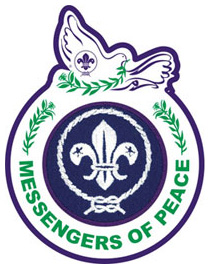 Craig Hall, a Scout leader in the Great Salt Lake Council in Utah, said, “We did not know our assignment when we came down here. We were willing to do whatever. That’s why we’re wearing our Levi’s and grubbies — we were prepared to do whatever needed to be done.”

He said his impression of West Virginia was that it was “beautiful, wooded (and) humid.” The moisture in the air has been “certainly different from what we’re used to,” he said.

Hoyle said, “I really like how green it is.”

The Utah Scouts’ assignment to the last day for service work in West Virginia communities meant that a lot was ahead of them on Tuesday evening and early this morning.

A bus was scheduled to pick them up at their campsite at 6 a.m. today. They were planning to cook their supper on Tuesday evening, stow away almost all of their gear, and awaken at “3:30-ish,” Hall said, to pack up their tents and be ready for the arrival of the bus.

But they left Athens with contented smiles on most of their faces, after posing for a group picture that is to be hung up at Athens Town Hall.

Hall said, “I believe that Scouting is an organization that should and does teach young men character traits. Giving back is one of those traits we all need to learn. It’s inherent in the Scout law that we should serve, and give back, and pay it forward.”

Alexander, an Eagle Scout from the 1990s, had to change the game plan early Tuesday morning. The Scouts’ assignment originally was to paint curbs yellow in no-parking areas of town. Morning rain made that job impossible. 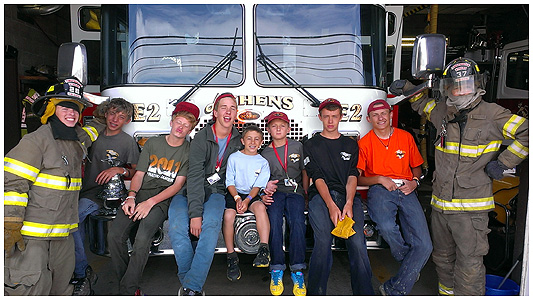 Instead, they cleaned other curbs in town, helped members of the Athens Volunteer Fire Department tidy up their firehouse, and picked weeds and laid new mulch in the playground area of Athens Park.

“I think the day went better than I had anticipated this morning, when I saw the rain,” Alexander said. “We managed to rally enough equipment for the kids to use, and find opportunities around town for them to work.”

Alexander said additional Athens residents worked in the days leading up to Tuesday, scraping weeds and debris from areas that they anticipated would be painted yellow.

Lokay was “extremely helpful,” he said, and about eight women from Concord United Methodist Church and Athens Baptist Church “did a wonderful job” of feeding lunch to the group.

Lokay said the town hopes to set up a date for a “community gathering” to get the curbs painted yellow.