Benefits of The Buddy System

I was in the Uintas today breaking in some new hiking boots and checking snow levels at Steiner. While in the area, we stopped at the trailhead where that 63-year old hiker from Australia is reported missing.  What a sad story.  Eric Robinson came to the states to hike some of our best trails.  He set out for a 10-day, 60-mile hike on the Highline Trail here in Utah on July 28th.  This hiker was supposed to be picked up at the end (at Mirror Lake) on August 7th but never showed up.  Here it is the 27th, twenty days after his anticipated arrival, and still no sign of him after weeks of searching. 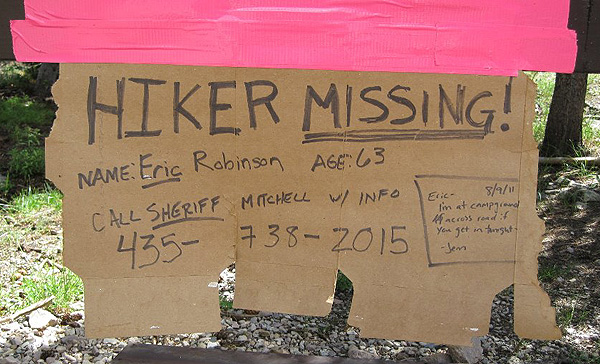 This scenario (and unfortunate outcome) sure reinforces the benefits of the buddy system.  Did he get hurt? Or attacked by an animal?  Did he get lost and run out of food or water? Had Eric been with someone, anyone, could his situation been avoided?  Really makes me think twice about hiking alone, even with a SPOT emergency locator beacon.

Another flyer posted at the Highline trailhead stated that Eric started from the Chepeta Lake Trailhead (35 miles north of Neola by car).  It also says “he was last seen at Bluebell Pass headed towards Five Point Lake and Tungsten Pass”.  Now I’ve never been on this trail, but in looking at maps and reading details about this popular route, I have to wonder how Eric got to Bluebell.

Bluebell Pass is quite a bit off the main trail.  Did he detour down Yellowstone Creek to go around Tungsten Pass the long way?  Did he make a wrong turn up Milk Creek and ended up at Bluebell?  If he was last seen at Bluebell “heading towards Five Point Lake”, that means 13+ miles between the Yellowstone drainage and the Garfield Basin to get to Tungsten. With 10 days to cover 60 miles, would he take an alternate route from the main Highline trail?

How else do you get to Bluebell Pass from the Highline Trail? Does Highline splinter on the east side of Kings Peak and cross the ridge somewhere between Kings and Mount Emmons?  Did he get lost?

Take a look at this Google Earth file for reference points. As a complete outsider to this search and rescue effort, I’m really hung up on this piece of information.  How did Eric get to Bluebell?!

One Response to Benefits of The Buddy System