At the beginning of this year, our Bishopric threw a challenge out for the Deacon’s Quorum to attend the Temple more than they themselves were planning to do in 2011.  This invitation was first made to our Young Men’s 2nd Counselor (Asst. Scoutmaster) who gladly accepted 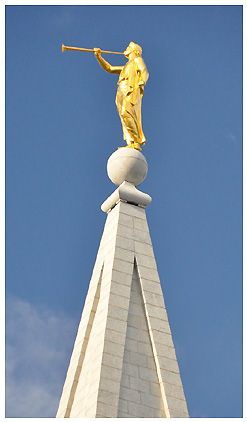 without a second thought.  I remember hearing about this and thinking; how the heck are we going to visit the Temple more than the Bishopric does??  Yes, there’s a story here…

It goes back to 2010 when our Bishopric made a commitment to attend more regularly as a leadership body.  It was a personal challenge to themselves to be more in tune with the spirit while seeking guidance for the responsibilities they each individually held.  To visually represent this commitment, and to remind them of its importance, a glass bead was placed in a vase each time they attended as the months went by.  The year then came to an end and the beads were counted.  120 visits over 12 months by 3 Bishopric members.  WOW!  At the time, I couldn’t quite grasp the kind of focus it took to visit the Temple that much.  I mean, the numbers average out to be TEN TIMES per month, or TWO+ TIMES each week when you do the math… “Now that’s dedication” is the thought that kept running through my mind!!

This is what we were up against when 2011 rolled around.  We…ok, I wasn’t quite sure how we were going to tackle this.  Yet, I knew the Bishop wanted others to develop the same love for the Temple that he had and, with his fun-spirited nature, gave the boys what gets boys going – something to accomplish that’s bigger than them.  Whatever the strategy, our Deacons were excited about what they were about to embark upon and already talking about when we’d go and how often we could (which by the way, is what prompted our first Temple Blitz).  Not long after, the challenge was extended to everyone with the added incentive of earning a bountiful BBQ for the group that dropped the most beads.  In fact, two BBQs were offered to rev things up; one for the frontrunner at the half-way point in June and another for the victor at the end in December.

Here’s where we stand half-way through this 2011 Temple Challenge.  As you can see, our temple attendance is quite a bit more than the Bishopric at this time.  However, we are planning a second Temple Blitz this fall to keep the pressure on them! 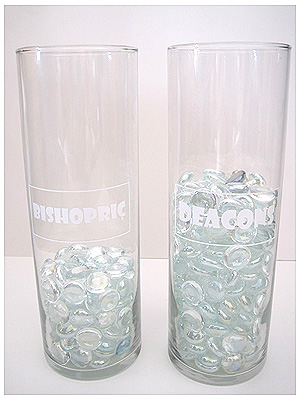